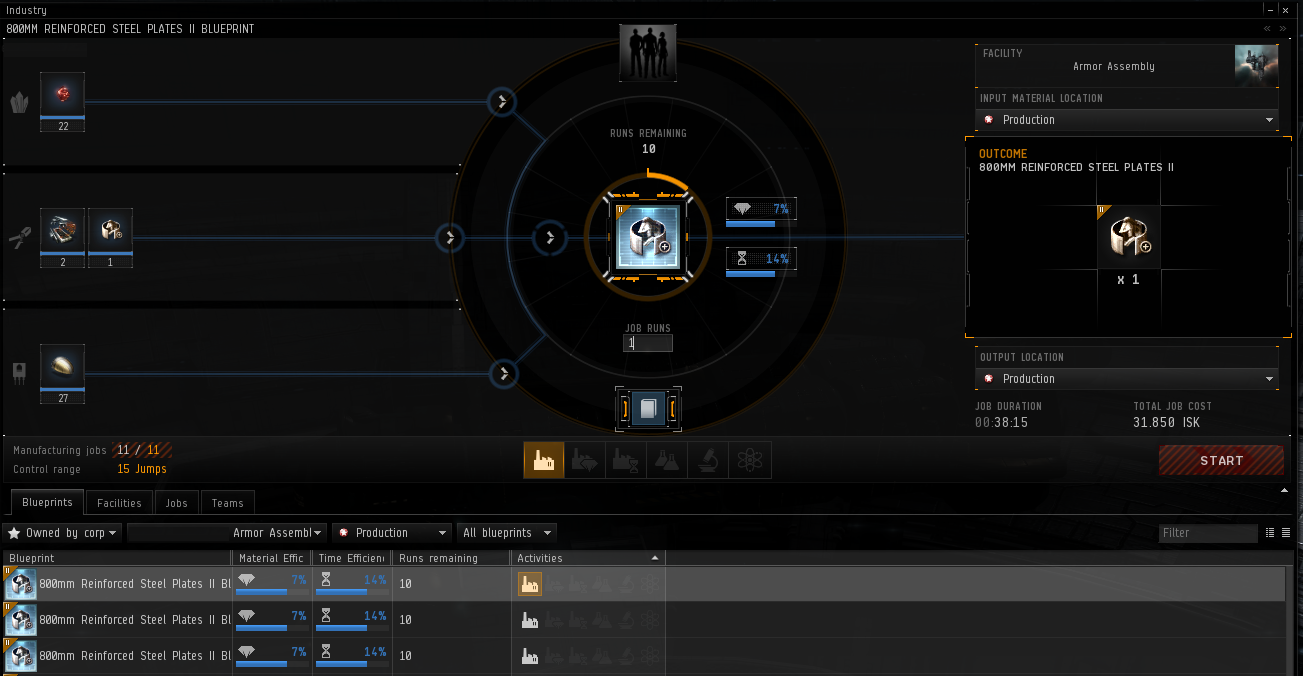 “You mean, I need less materials? Sweet!”
The fact that I can even install jobs remotely from a dozen or more jumps away, means that I can use my trading alt too. Of whom I found out that he has the necessary skills to do my invention and manufacturing runs too. Guess it’s a good thing I checked my skills on him.
The only thing that was missing was the ability to install them remotely so I did the most obvious thing to do… I bought a PLEX from the market (through a sell order, shame on me!) and activated second character training.
My trader now has a month of training activated for him, which I will use to train him a bit further into retail and allow him to activate remote jobs.
I’m still figuring out the bonuses that my POS can have, and what it does (as far as I’m aware they’ll just reduce the installation cost) but for now, I’m really happy what Crius has offered me as an industrialist.
Stay tuned o7
Crius will be deployed today, the only reason I know this is because I noticed the Facebook update post from EvE Online stating that everyone should make sure that their queue is nice and long. You know, just in case.

“Changes are coming”
What does this update mean for people? For some, nothing at all, seeing as there are people out there who don’t really care, or read up on anything and they just play the game, figuring it out as they go.
Others on the other hand will have their way of working in the game changed completely. Just think about how blueprints now have to be inside of the installations instead of safely in station while you’re copying them, or doing anything else related to them.
I have to admit that I myself don’t really know too much about the coming update myself. This due to the fact that the past few weeks I’ve been busy slowly melting due to heat and the last thing in my mind was sitting in front of my computer reading up on things and testing on the test realm.
I do know however, that my POS production will change completely. In the past weeks, the one thing I did when logging in was copying a lot of BPO’s again. Mostly things that I used to invent in the past but haven’t in over half a year.
I figured that with the coming update, it’d be nice to try and go back to my normal way of manufacturing, so right now I’m sitting on about 400 T2 bpcs waiting to be put in production. (See, I did do something productive!)
I can’t wait to try out the new way POS’ work. I’m also rather curious on whether or not we’ll see more of them popping up. I’ve seen people speculate on the fact that there will be a lot more in high sec because there will be no restrictions to put them up (aka standings).
Good thing that I have about 4 months of fuel stocked up just in case the prices will suddenly rise.
In addition to all of this, depending on how that in station invention/manufacturing will turn out, I might just decide to take down my POS. But that’s something that I will have to look into soon(ish). It all depends on what the numbers will say.
As for none industry related news;
I’m still looking for a Low Sec corporation to join. I haven’t been looking that hard but I’ve got my eyes open. If you know someone, or are someone, who wouldn’t mind having me around spinning my ships and joining whatever it is low sec corps do. Feel free to give me a shout.
Stay tuned o7