As most of you know, the World cup started last week. Those of you who have no idea what it is and are blissfully unaware because their country doesn’t really participate in the whole soccer thing: Good for you!

I live in a country that was able to qualify itself, which is a good thing because we’ve been waiting on this for for a few years. Or so I’ve been told since I don’t really follow it myself. But it’s easy to get sucked into the whole atmosphere concerning the World Cup.

Which is why I’ve been actually following it quite closely the last couple of days. Saw a few awesome matches and a few that were disappointing.

What does this have to do with EvE you ask? Well, due to a friend of mine betting on soccer, I figured I could try this too, but not with my hard earned euros, but with ISK.
The fun thing about EvE is the fact that almost everything is permitted, even using your ISK to bet on out of game sports. Some people even make a nice amount of ISK on this, so I figured, why not try this out and see what happens.

I haven’t been using my ISK for anything other than the whole Prospect building “fiasco” so it’s time to make a few dumb arrangments and use it on something silly like gambling.

I’ve put 60m ISK on a few matches and nearly tripled that, so I’m kind of giddy with excitement that I actually made the correct bets. But we all know that I’ll lose it all in a while. But that’s no big deal, 60m isk is easily made in an hour or less.

Next to the betting I’ve been browsing the forum and talking to friends to see what I want to do in the game. I made an alt that I’m currently training into stealth bombers only, since I like flying them. And I’m training my main in the use of interdictors.

I’m not sure yet where I want to go with him but hopefully I’ll figure this out one of these days. Low sec is waiting for me and a friend is trying to get me to come into the wormhole.

Might just take him up on that, although I really, really need to practice my scanning if I do..

You win some, you lose some. And the past week I lost a bit.
I had hoped to cash in on Prospects, to make a bunch and have a nice amount of profit. Unfortunately, this hope was linked to the fact that people would keep the price high for at least a few days.
Back when the venture was released, I made a lot of money in that first week, creating these new mining ships for noobs. I thought I could do this again. But this time, I was ready.
I spent a few hours on the test realm writing down what would be needed for a Prospect. After the file was created I went on my way to Jita and started setting up buy order for the raw material. I already had all the BPO’s that were needed to create a few of these ships so I could save a bit more money on these.
When all was ready I waited for the patch to drop, over 200 venture BPC’s, ready to be invented. The invention of one such BPC takes 12 hours. The fact that I, like many other people, have a job, meant that I could only start an invention run at around 7, when I got home from work. Meaning that some people already had a head start.
12 hours pass and it’s 7 o’clock, I should have already gone to work but I decided that I’ll just work from home (allowed to do this once a week).
This was a good decision. Because as it turned out. I made a mistake. No surprise there.
Instead of having an Advanced Ship Assembly Array, I had a normal one. Which meant that once more, despite me thinking I was prepared and wouldn’t have to go to Jita. I had to do just that.
I bought a few and brought them to my POS. Forward about half a day and I have my first Prospect ready and 10 more in the tubes. These would take a few days to complete, but I went to Jita with high hopes.
The first 3 I ever made, were sold for a nice profit of around 100m before they went down, and down, and down.
I was looking at the market and saw them going to around 25-30m and sticking there. With a heavy heart I have to admit once more, that planning is not my strong suite and that I definitely am not made for long term options.
I’ll still make a profit on what I have, but it won’t be near the profit I had hoped.
Such is the life of an industrialist. You can plan all you want, but your competition will be doing the exact same thing and they’ll make sure that your profit won’t be as high as it should have been. 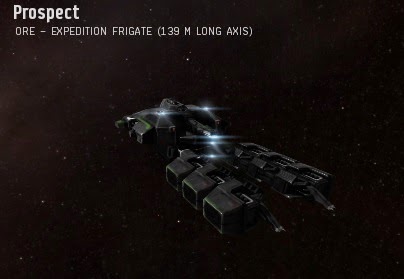 Today marks the launch of a new release for EvE. New things happening, industry wise and others that I don’t really know much about.

Why’s that? Because I only cared about one thing, a new thing to invent. Namely the prospect. In a few hours when the patch goes live we will be able to invent a new T2 frigate from Ventures. I have prepared accordingly and have about 100 Venture BPC’s ready to put in my laboratories when I get home from work this evening. Hopefully I’ll be able to create a whole bunch of Prospects by the end of this week and sell them for a nice profit.

Because that’s what this is about, profit for me. I don’t use the Venture myself and am not planning on using it any time soon. Unless I suddenly feel like going out to get some gas in a wormhole.

Speaking of wormholes, let’s talk about my lack of doing anything that might destroy one of my ships.

Last night I was browsing Reddit like I usually do when I should be asleep and saw an image linked that was rather fitting to what I don’t do.

I would link it here but I forgot to give it an upvote and I can’t seem to find it again. It basically said something along the lines of “What use is having a ship if you don’t take it out for a spin”. Although I do take it for a spin, I never seem to leave station anymore.

So I need a reason to go out and get killed. I need to stop being a ‘pussy’ and go out to low sec in a frigate to get killed a few dozen times. Or do some killing myself but, let’s face it. I’m a noob, so I’ll more than likely lose ships instead of making others lose theirs.

Unfortunately that means actually taking the time to go out. And that might take a while before I can do this. Maybe I should try out a low sec corp, have people to talk to. People that give me a reason to log in on my combat alt, instead of me just logging in on my Indy alt to update a few queues and stuff on my POS.

Plus the fact that I was gifted a key to Wildstar in order to check it out isn’t helping either. I’m AFE (away from eve) too much for my characters good.

Let’s try and change it shall we?