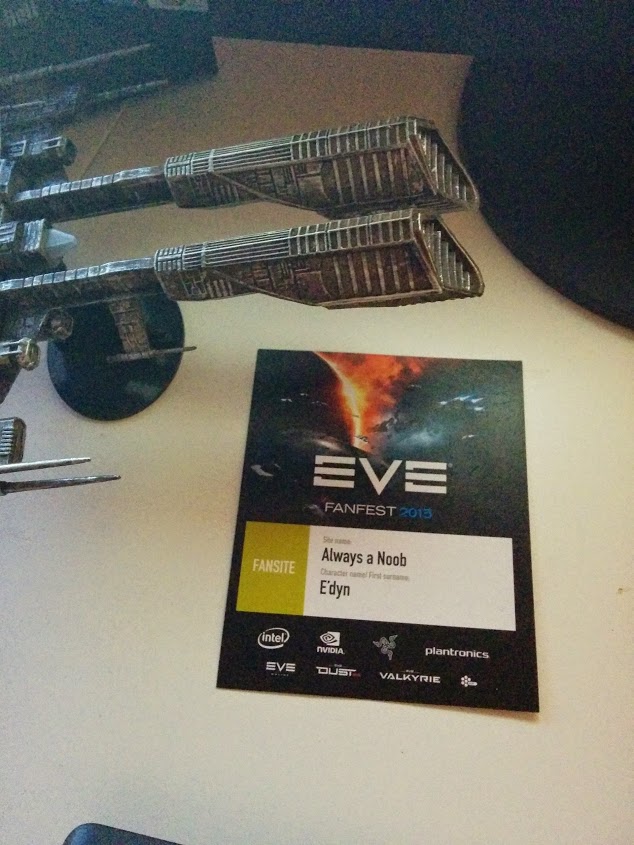 Fanfest is currently going on in the lovely Icelandic capital called Reykjavic.. Because you know, people from Iceland just love using weird names for their things. Like the vulcano Eyjafjallajökull. You try pronouncing that correctly, it’ll take a few tries.

Unfortunately, I couldn’t be there. Not because I don’t have the time, but more because I didn’t actually think about going until it was too late/too expensive to book a trip. I didn’t really feel like paying close to 1000 euros for 4 days.

It’s a shame because when I see other bloggers post about their little adventures the coming days, I feel a bit envious and wish that I did spent some time in figuring out how to get there. But alas.

However! CCP Logibro was nice enough to send me the pass I would have gotten by airmail. Which is all kinds of amazing. I got it this morning and this is now part of my growing EvE collection.

In no other MMO I’ve had the kind of interaction with the dev team like I have with the CCP team, and it’s all super cool that they were willing to do what they did.

That being said, the new trailer came out yesterday, and it’s so pretty. I’ve seen people call it Space zombies but the sleepers are so much more.

Just watch it and be amazed, these trailers keep getting better and better.

“You should be watching this”

The one thing that stops people in EvE from trying out new things, is the fact that they’re afraid of what might happen if they get out of their comfort zone.

I’ve been part of that certain groups for quite a long time so I know how it is. You want to try new things, but are afraid of losing a ship, or just not being good enough for something.
And that’s a shame, because in genera EvE has so many fun things that you as a player can do, all you need is to try it.

I used to be afraid of wormholes/null/.. Well basically any zone that wasn’t high sec, thinking that as soon as I were to step out in lower security space I’d get my ship destroyed in seconds.

How wrong I was, turned out that in null sec the people there are afraid of neutrals, and in wormhole space nobody really knows you’re there until you bump into them. Being on purpose or accidentally (I’ve had both sorts happening on a few trips in the past)

Low sec.. Well that’s another story, most people like a fight and they wouldn’t mind going after you, but most of the time when traveling you won’t have much worry from pirates because if you go from gate to gate you’re pretty safe. Although don’t think I’m saying that you won’t get killed, gatecamps still exist and they will kill you if they get the chance, you just have to make sure that said chance doesn’t happen.

The past few weeks I’ve been going in and out of wormholes again, with a not too cheap ship, but I switched my mindset from “Oh no I don’t want to get blown up” to “Fuck it, might as well get it blown up”.. I haven’t lost my ship yet, but I’ve had a few close calls.

Still itching to join a wormhole corporation though, but yet to find one that isn’t too serious about losses, and yet serious enough not to have them happen due to stupidity..

Which is not an easy thing to find.

A shame that most people I knew in game stopped playing, I had fun two manning a C4, but we could have used a few more people in order to survive.

I’ll figure it out sooner or later

A few months ago I had my first taste at exploration. By way of being in a wormhole I learned how to work the scanner, and enjoyed it. Which was a surprise at the time because of the fact that the scanning tutorial I did way back when I started playing EvE was not fun at all and mostly frustrating.

But due to skill points and asking help on how it works, I learned to work my probes and enjoyed using them.

Unfortunately I haven’t used them in quite some time. In fact, the only ship I’ve flown in the past couple of months is my industrial character’s leopard for moving between Jita and my home system where I do my manufacturing.

That changed earlier today. I bought myself an Astero and called it Curiosity.

The plan is to start going out and learn how to hack containers. Something I tried before in for about 10 seconds before I got my then scanning ship (a cheetah I had for years) blown up because I was paying more attention to the virusses instead of d-scan.

The next few days/weeks will be spent back in the game, doing things I haven’t done before.

Chances are I’ll get myself blown up, because I’ll be popping in and out of wormholes in a semi-shiny ship. But that’s what ISK is for, to get it blown up again and again while hopefully making some people explode too.

This is a change since the last couple of months because in those months since I stopped living in a wormhole were spent playing other games, and only updating my manufacturing in EvE.

We’ll see if I can keep it up, but I enjoyed being in a wormhole a lot. We’ll see what happens once I figure out how to hack without destroying the loot.