Steve is the name of the drifter battleships that can sometimes make wormhole space a bigger pain than it already is. Not only does he put out about 2k DPS, he also neuts like crazy. And that’s the most annoying part of him really. The DPS is something most people are able to handle fairly well, but the neuts, my god the neuts. 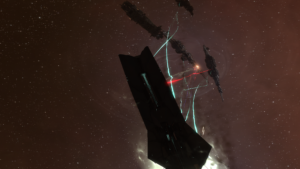 I’m not sure where the name Steve came from. I just know that we’ve been using it for a while now, and supposedly the guys in corp that started using it had it from someone else they flew with. But his name is Steve now and I shall always know him as such.

Making ISK in wormholes can be done in multiple ways. There’s PI which is obviously the easiest one, there’s relic/data site hacking, there’s evicting people and stealing their stuff. And then there’s doing sites.

Which is what I’ve been trying to do in the past week or so. Sites can be done in multiple ways. You can do it with multiple people, or solo it (if you have two tinker rattlesnakes) Mostly when doing it with subcaps you’ll get roughly 300m per site. Without taking into account the fact that you need to close down incoming connections you’ll earn about 400m/hour, give or take a few.

At the end of the site, a structure will uncloak, and if you shoot it, Steve will spawn and he will try to fuck you up.

Luckily you can also use dreads for sites like this (if you are in a bear hole or if you have them in your own hole). Warping in a dread will “escalate” the site, spawning a few more battleships that are just a little bit harder to kill and drop a little bit more ISK in the end. But killing Steve with a dread is so easy. In the end you can make roughly 700 to 1b/hour per character doing it, IF you have this thing down. And that’s with just two dreadnaughts doing it. 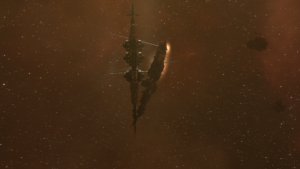 I tend to forget about my speed from time to time. And bump things

I can’t even imagine what the income from this used to be. Supposedly it was a LOT better. Which kind of makes sense, most of the veteran wormholers don’t really have to worry about ISK at all.

With PI and doing sites. I might just make the ISK back that I put in this dread pilot. That makes me happy. I just hope I earn it back before the Naglfar dies. And it will die, I’m sure of it, I’ll probably do something stupid with it. That’s what normally happens when I let things die.