Last night, was a good night. I got to use my Proteus again! It has been with me since I started my wormhole adventure way back with Raka, and despite it surviving for that long, I haven’t used it as much as I would have liked.

Yesterday started with a little roam in null. I was supposed to get to a gate-camp the guys were doing but once I got there the null-bears had finally decided to fight and we had to move back home with our tail between our legs after losing a few of the fleet. Once back, the guys who didn’t drop fleet since it was getting late, decided to go out for a little roam again. As per usual these days we didn’t really find much.

We did have a frigate hole in our chain, in which there were a bunch of miners on scan, and even a few Brutix’ etc. We knew this thanks to the scouting skills of one of the guys. Supposedly they even put up a bubble on the incoming wormhole to their system. So they knew it was there, and they had eyes on it. We hoped to get a fight out of it going in, or at least piss off a few miners. Seeing as most of them really hate being disrupted.

We decided to go out there in interceptors.
The frigate hole was connected to us through a C2, we wanted to go through, grab point on a few miners and keep them pointed, our heretic pilot was a bit slower, so we waited on him in the C2. When you live in J-space, you tend to use d-scan more often than in k-space. Most of us do it every few seconds, and it works. We saw an Epithal on scan, it wasn’t at a POS, not at their Citadel, so we searched for it and found him at a POCO. Before you know it we had three points on it and started to shoot. A few seconds after first point, a Tengu pops up on d-scan, the Epithal has backup. Seeing that I tend to make bad calls, we killed the Epithal and engaged the Tengu. This is with four interceptors and a heretic. We didn’t even put a dent in the Tengu’s shield.

The heretic died and we disengaged, we didn’t want to lose more ships to this. Luckily the interceptors are quite fast and getting out of point/scram range was easy.
After that our heretic pilot wanted to keep eyes on him, hoping to get revenge. “I don’t care if it takes me all night I want my revenge.”
I put my Proteus pilot in the C2 too, keeping an eye on the entrance to our home.

Meanwhile the pilot out for revenge kept an eye on the citadel and we went into nullsec. Our primary goal wasn’t forgotten, we still wanted to do annoy the miners. But they weren’t around. All of them were just floating in their POS.

As we came back a Brutix landed on the home connection, it was 60k off the hole, 70k off my Proteus. I started slow boating towards him with my Proteus, one brave Raptor went ahead and put a point on him. Giving me the opportunity to decloak and make my way over there to point him too.

While all that was happening the Tengu undocked again and warped to zero on the hole.
We pointed him too tried to kill the Brutix, who jumped into our home hole once he figured out we’d kill him. Seeing as we still needed to have our revenge on the Tengu, we started to shoot him. We couldn’t scratch it, it couldn’t scratch us. This is where alts come in handy. We made sure that we had a few points on him while others shipped up. Seeing that we couldn’t kill him with the interceptors earlier, having one Proteus as help would probably not do much either. I shipped E’dyn into a Hurricane and in the end, due to Pilgrim neuts, Falcon jams and our DPS, we were finally able to exact vengeance on the Tengu that killed the Heretic. He was shiny and had an amazing tank, but no cap and a combined total of more than 4k dps means certain death. Even if it took more than 20 minutes that fight was pretty fun. Hooray for alts! If we didn’t have those on standby, we would not have been able to break him. Kudos to him.

The loot fairy was good on us too, we had 1b in loot drop on us, so we got out with 250mill each. I paid the guys with my liquid ISK and have the mods waiting for my next Jita run where I’ll be able to sell them.

I have to say, it was the most exciting POS bash I’ve been in. Mostly due to the fact that they started to panic.
The skiffs were being packed up in the Rorqual. The Phoenix started moving and logged out. It almost seemed as if they knew their tower wasn’t stronted. Due to the moving around of ships, one of the online, AFK pilots was bumped out of their shield in his hulk. It died quickly, so did the pod.

Unfortunately, the POS was stronted, so I’m still not sure why they panicked. We might have to go back there tomorrow. Even if it’s just for a few laughs. Op success. 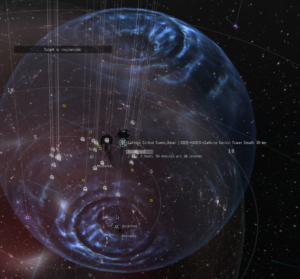 All in all it was a good night, just a shame I didn’t record it.

And on a little side note, to show that I’m still a noob. During the Tengu fight my point kept getting turned off, and I had no idea why. Turns out that instead of turning off overload, I had accidentally turned off auto-repeat. Yes, you can laugh, that could have cost us a Tengu kill, I’m glad it didn’t.