Last night I decided that I wanted to go do a level 4 mission again. I went ahead and accepted a Guristas Extravaganza. As most of you that run missions know, it’s not too hard when you’re tanked well, you just sit there and shoot everything in sight. So that’s what I did, lock down as much as I could and just shoot them to pieces.
Naturally, that was what I did on the last pocket too, deciding to go for the frigates and destroyers first. But after a few weeks of doing mostly manufacturing, I had forgotten that shooting the trigger, is not something you want to do fast if there will be multiple battleships warping in.
Shooting the trigger of that next warp is not a smart thing to do either.
That is, of course, exactly what I did. Not only did I shoot the first two triggers, I shot every trigger. It didn’t take long for all the newly warped in battleships to get my shields down to 15%. This was the first time in a long while that I was actually afraid of losing my ship, I had to align to the closest asteroid belt and warp out of there. I tried going in there again, see if I could shoot a ship and then get back out, but that plan didn’t turn out too well.
At least that’s something I learned for next time; I’ll have to watch the triggers.
Luckily someone in the E-Uni channel was kind enough to help out, not only did she do 9 jumps, she came in here Scorpion Navy Issue, tanking everything in the room as we killed the ships.
I’m happy that she came along, very happy even that she decided to stop what she was doing to help this little noob that forgot about triggers.
This just goes to show that not everyone in EVE is a heartless scammer and that there are people out there willing to help out others. The only thing she asked for in return was for me to pay back her ammo and return the favor to someone else when someone asks for help.
Which is something I will definitely do, I’ve already been doing it whenever I could actually help anyhow. It’s nice to help out those who’re stuck.
On another note.. I really like the Scorpion, I should get one myself, the only problem is that I just can’t fly it worth a damn. And there’s still so much on my skill plan. But I want one, maybe I’ll just buy one to spin in my hangar and fantasize about all the lovely things I will never be able to do with it. 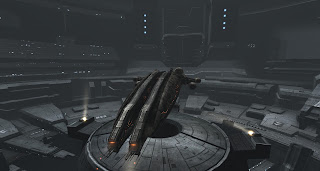