I didn’t get any kills last weekend. But I made up for that on Monday and Tuesday. Not by much, but still.

When I came back from work Monday I was told to immediately grab myself a cruiser and join the TeamSpeak. I had absolutely no idea what was going on, seeing that I don’t actually read my evemails when I’m at work, despite being able to do so.
Once I was told that we were going to go on a cruiser roam I jump cloned to an empty clone and bought myself a Rupture. 15 jumps later I was in our starting system and waiting for the roam to begin.
Bearing in mind that I have absolutely no idea what I was doing, I just followed orders, warping and alligning when I was told to do so.
We went through Minmatar FW space, but every time we jumped into a system, the people in local warned other people and not long after that we’d be all alone. It’s a shame, we were just looking for fights but the fights ran away from us. 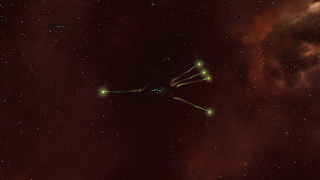 Reps are up!
We were “lucky” in one system, our only frigate along with the roam was slacking a bit and warped later than the rest of us from the stargate to an outpost. Funny enough, he saw a Stabber Fleet Issue uncloak and line up to his warp spot. Knowing what was incoming we just lay in wait, ready to point the Stabber. I had top damage but didn’t get the kill, that was for one of the other’s drones. No biggy, I now had a positive number on my killboard. Yay.
After flying around a bit longer we came across a system with a Drake Navy Issue on D-scan, we found him in an outpost but he warped away. To a belt. Our FC, in his “panic” of catching that Drake, he warped us there too, at 0, thinking that the Drake was probably smarter than that we thought we wouldn’t be getting that Drake.
How wrong we were. After popping him we caught his pod and tried to ransom him. We didn’t ask much, it was a 4 month old character, and we figured that he’d be able to pay 25m. He told us that he didn’t have the money, and right when we decided we’d just let him go. Because in the end we are not bad guys. He self-destructed. I have no idea why he did that, but that was funny. Especially considering that he had a 100m pod.
Both the Drake’s fit and his pod made me wonder what he was doing there. But I just figure that he was one of those guys that buys PLEX, sells it for ISK and then flies something he shouldn’t be flying in.
It was either stupidity or not caring about it. Either way, my killboard is now positive. Yay me.
Yesterday we decided to do the same as before, but this time in Battlecruisers and Gallente FW space. Unfortunately we didn’t actually find much, we did get the drop on an Atron, the poor guy must have shat his pants because he didn’t do anything, didn’t even move. (yes I know, he was AFK, but looking at him like a deer on the road, looking at headlights coming towards it is much better). 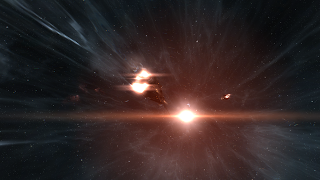 The race is on!
I enjoyed myself during the roams, and not because I actually like PvP. No it was all because of the teamspeak, talking to the others and making jokes. I think that’s the only thing that kept me interested in the roam. Otherwise I would have stopped much faster.
I learned that if I ever were to go out and PvP, that I really need to learn how to use D-scan, and fast.
Stay tuned o7