Trading has been put on a definite hold for now. Mostly due to the fact that prices seem to be dropping everywhere.
So I’m just going to build a small stockpile and then when prices rise again I’ll have a nice amount of profit.

At least, if they rise, but I’m sure they will, it’s the holidays, people just have more time to play right now.

I’m ashamed to say, that after playing EvE for so long I have finally found a use for the transactions tab in the wallet. I have never, in my whole life on EvE clicked it, until a few days ago. This little thing would have made everything so much easier if I had known it existed sooner.
As one of the people I talk with stated: “You’re a trader, you make a nice amount of ISK by trading, and you never used that tab? WHAT?!”

I know, shocker, it came as quite a shock to me too when I found out how much that can help when you’re trying to figure out how much you paid for something because you never write it down.

Speaking of never writing things down. I have made about 10 trips to Jita yesterday. That doesn’t seem like much, but I did it in 2 hours time, in an Iteron that could have done everything in one trip if I cared to remember everything I needed.
I didn’t take the bpcs along and I hadn’t written it down so everytime I came to Jita I remembered a maximum of 2 things I needed.. But not the amount I needed.

I’m not that good at this spreadsheet online game this week, can you tell?

As for the combat alt, he has finally gone out of the station! After a few weeks, it was about time! But I didn’t do any combat, I did scan a bit, even went through a few wormholes, enjoying the view. I did forget to make screen caps, but I’m going to point fingers at the fact that while I was playing yesterday, I was also watching a few online training videos for work related things.

I’m going to try and do more tonight, we’ll see this weekend if I actually succeed in this or if I fall asleep because I’ve been working my butt off.

When reading other people’s blogs, especially the industrial ones, I always come across the same kind of things. People calculating everything. From the amount of ISK they will make with the sale of one product, to the cost of the invention, everything gets written down and put into their spreadsheet and used to calculate their total monthly profit.
I, don’t do that. I know that EVE is called spreadsheet online for a reason, and I use spreadsheets, I use them a lot. But I just can’t bother putting every single step of the process in a sheet to see if the things I make actually have a nice profit margin or not. Wether its 5% or 500%, as long as I see my total amount of ISK rise, I’m a happy camper.
Now, is this the wrong or the right way to do it? It’s neither, it’s my way. It’s definately not the best way out there but it keeps me from having to manage every single step of the process and keeping it all written down. I probably make a bit of a loss on some items, but I probably make a nice amount of profit on others.
Note the use of probably there. I have absolutely no idea which one of my items makes me the most money. And that’s where I’m doing it wrong. But I just can’t bother to try and manage everything. I still have over 600 blueprints in my hangar that I need to invent. 600! That’s 600 updates to my laboratories, and everyone working with POSes know that this is not a nice way to spend your time. 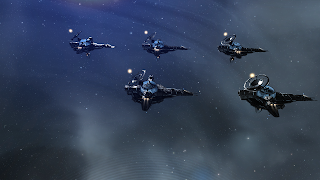 What do you mean: “You have to do us one at a time”
I keep hoping on a POS update, but I doubt that it’ll come anytime soon.
The reason why I’m starting about this is because today I will be putting the last of the T2 blueprints that I have in stock in manufacturing lines. I put a small hiatus on invention because I started to hate doing it, I hated logging in to update the lines, invent some more.
But unfortunately, I’m at that time again where I have to.
This time however! I will try and use decryptors, something I haven’t done before, and I think I will start writing things down more, see how much of a difference that gives me.
Not using decryptors gave me about a 55% chance of getting a T2 BPC, the use of them will (hopefully) up that chance a bit. We’ll see what happens.
I still love my POS, but sometimes, I wish this was all a lot easier, but then everyone would be doing it!
Stay tuned o7