I’ve seen these going around the EvE blogosphere and on Reddit the past week or so, and I figured I’ll join in. 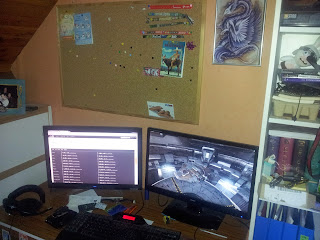 Don’t mind the mess
So this is how I EvE. My current setup is two screens, on the one screen I usually have all of my clients running, and I just switch between windows, and the other is for my Facebook, Twitter, eve-central, steam chat and so on.
There are times when I use one of my notebooks along but I don’t have enough room on my desk for now. I switch between clients because I usually don’t play on all my account at the same time. The only time that I have two on the same grid is if I’m doing missions and the other one is cleaning up behind him in her Noctis.
As shown in my first sentence, I too am a Redditor, and I browse /r/eve quite a bit when I’m supposed to be sleeping, or when I just woke up.
While browsing the topics this morning I came across a gem of a post, someone asking for stories to tell to people in order to get them to play eve.
One post in such topic got my attention and brought a smile on my face while reading it. This guy took his time, writing down all kinds of different reasons on why to play eve, and it gets through to the gist of the game.
If you want to read it too, here’s a little link for you.(top post) I’m sure most of you already know it but I haven’t been on Reddit for that long so it was something new for me.
I’m not sure what my gameday today will be, I was planning of taking out one of my mission runners and having my second one finally undock and join him. But the corps I’m in is at war so I’m not too keen on taking my shiny, shiny Machariel out of undock.
Maybe I’ll go back to scanning a bit.
Stay tuned o7